How to Write a Press Release that Gets Results

How to Write a Press Release that Gets Results

Posted by Kyle on Feb 18, 2014 under Featured, Marketing, Press Release

A press release is simply the sum of its parts.  To write a good press release, you just need to include the right elements and organize them in the right way.

What are press releases, and how can they help your business?  Before we get into the gritty details, let's answer a few basic questions about the nature of press releases and what they're for.

How these messages are supplied to the media, as well as how they are written and formatted, has evolved over the years.  Today, most press releases are distributed online, via email, RSS feeds, and newswire services.  There are a number of press release distribution companies, including Vocus, BusinessWire, PR NewsWire, MarketWired, and others, all of which boast various proprietary distribution methods and recipient lists.

For these reasons, press releases are an important part of any online marketing strategy.

Getting the Most Out of Your Press Release
It's easy to write a weak, ineffective press release.  It's even easier to distribute that release and get nothing out of it—few pickups, a miniscule bump in traffic, no media attention whatsoever.  This happens all the time.  Why does it happen, and how can you keep it from happening to you?

To get the most out of your press release, keep these guidelines in mind when writing and releasing it.

How to Write a Press Release

A press release can be broken down into four parts.

Let's take a look at how to write each part.

HEADLINE
The headline is the first thing your readers see, and in many cases, it's the only thing they'll read, making it the most important part of your press release.  Everything hinges on your headline.  But media professionals and consumers alike see hundreds of headlines every day.  How can you ensure your press release gets attention?

That depends.  What goal do you want your headline to accomplish?

Your headline can do one or the other, but not both.  Before you can write a strong headline, you'll need to decide which approach to take.

The first option works best when you're primarily interested in connecting with general readers.  You'll probably get more clicks and page views this way.  You'll most likely see a larger spike in traffic.  You might even get more media attention as well, since media sites like stories that drive traffic.  At first glance, this option seems like the way to go.

But can you deliver on the promise of your hook?  If you’re writing a press release to announce the grand opening of your new downtown bar and grill, is a hook appropriate?  If your company has won an important industry award, should you try to come up with a gimmicky hook to draw people in?  Or is it more important to get the word out to as many people as possible, as quickly as possible?

The second option is arguably more practical and better suited to the examples mentioned above.  Not everyone is going to read your press release.  But this doesn't have to mean that you've failed.  If you make your point in the headline itself, you'll reach even the “skimmers” who choose not to read on.

For example, if you're announcing the opening of your new downtown bar and grill, what you really want is for everyone in the neighborhood to know that Tom's Awesome Burgers is now open for business, and that it's located downtown.  The headline, if written properly, can communicate all of this quickly and clearly, expanding the reach of your message.

Writing an Effective Headline
There's an art to writing good headlines.  It's not something that can be taught in a single article—if it were, everyone would be writing perfect headlines all the time.  Still, there are a few basic techniques that can help you write a strong headline.  Keep the following tips in mind.

How to Structure Your Headline
Announcement headlines are often straightforward.  Take a look at some of these examples.

By contrast, “hook” headlines are a bit more complex and must be carefully crafted for maximum impact.  You can save time by looking at what's worked in the past.  To hook readers and communicate your release's promised benefits, start with any of the following headline structures and tweak it to fit your message.

SUMMARY
The summary is a brief paragraph, usually no more than one or two sentences long, that provides context for the headline.  Let's start with an example.

The summary expands on the topic presented in the headline by telling the reader what kind of information is included in the body of the release.  Notice that the summary isn't much longer than the headline.  A single sentence is often sufficient.

For announcement press releases, your summary should immediately present the relevant information concerning your company and the topic of the release—who, what, when, where, and why.

You'll notice this summary, though short, contains a who, a what, a when, a where, and a why.  Read it again.  “New bar and grill (who) at Cathedral Square (where) hiring 3 chefs and 27 support staff (what) for grand opening (why) in June (when).”  It's packed with information.  The summary communicates the entire message of the release, which is exactly what you want to do with a release of this nature.

BODY
In the same way that the summary expands upon and gives context to the headline, the first paragraph of the body expands upon the summary, clearly stating the topic of the release again and providing further detail.

The opening paragraph is the most important part of the body of your press release.  The body is where you deliver on the promise you've made in your headline, and you do this by providing facts, details, quotes, and other supporting information to drive your point home.

Ideally, the body of your press release should include the following.

BOILERPLATE
The boilerplate is a brief introduction to your company—who you are and what you do.  This is your opportunity to include a little tasteful self-promotion.  Usually three or four sentences long, the boilerplate often appears under the heading "About [Your Company]" and provides readers and media professionals with relevant information about your company and your reason for writing the press release.

When writing the boilerplate for your press release, keep the following guidelines in mind.

Why is this part of the release called the "boilerplate?"  For those who want to know, the origin of the term has to do with the way press releases were submitted and printed in the late nineteenth and early twentieth centuries.

Start Writing, Or Get Help

You're now armed with enough information to start writing a press release that will get results for your business.  You have no excuse not to write an awesome release, so get started!

If you feel paralyzed after reading all of the above, get help with your press release.  Take a moment to contact us about our press release writing and distribution services. 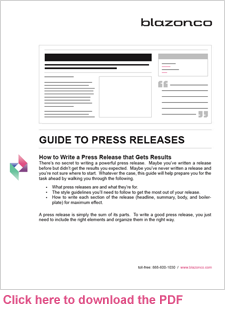 We also provide helpful written tutorials on the most prevalent tools and common uses of the Blazonco Content Management System.

But we understand that a written guide can't possibly cover everything and that many times, our clients have specific requests or simply need more personalized help.

Blazonco delivers custom website design and marketing solutions via a software-as-a-service model. Our proprietary browser-based content management system is maintained in-house by our development team and empowers website owners to edit pages and integrate any of our custom-designed marketing plugins.